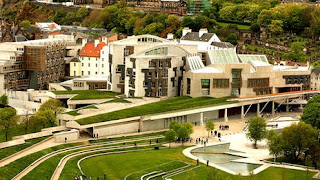 Tram depot handed over to the Council this afternoon ... SNP Minister quoted as saying:

"This is an important milestone for the project and demonstrates what has been achieved through the city council working alongside Transport Scotland and the contractor in the last few months."


Pity neither he, nor his colleagues, gave much thought to that potential synergy throughout the previous 4-years :-(

Anyhow, good to see such progress at last ---

--- of course, was all followed by some significant power-problems in Central Edinburgh just a few hours later!

Not that I'm suggesting the two incidents were in any way connected ;-)
Posted by Andrew at Thursday, December 15, 2011