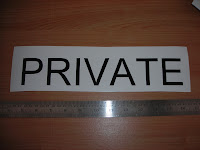 Some important three-letter acronyms there!

I'm referring, of course, to whether the Local Authority opts for the Alternative Business Model (ABM - privatisation to you and me!) or the Public Sector Comparator (PSC) when the Council meets in October - Thursday 27th to be precise.

Over the last few days, both Private Sector bidders and PSC Officers have presented their case to the Opposition Groups on the Council --- I wasn't able to make the former, but did make the latter, and made sure that Labour Group colleagues attended both sessions.

The information gleaned has all been very useful, especially set against the context of today's Spending Announcements ...

... but, I'm still left seriously wondering about the advisability of forcing through a decision on potential 7 to 12-year contracts less than 7-months before the next Local Elections?

It just doesn't make any sense - other than as a means to avoid serious scrutiny during the forthcoming Local Election campaign :-(
Posted by Andrew at Wednesday, September 21, 2011