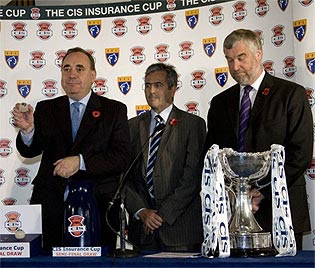 Rumour has it that Ron Gould has been called in by Dundee United to report urgently into the CIS League Cup voting scandal :-))

... personally, I think the guy in the middle of this picture should be given the job of running Scotland - the other two can't draw four-balls out of a bag properly :-(
Posted by Andrew at Thursday, November 01, 2007

Funniest thing I've seen for ages. As I posted, on Brian Taylor's blog (expect it to appear in a few weeks), perhaps the politicos were being a bit over-ambitious in attempting to play a part in something as complicated as the semi-final draw. Still, better to try and fail, than to never attempt to aim at the stars in the first place, eh? Perhaps they should have waited until after teh semi finals before getting involved?

Quite! Having blogged earlier: