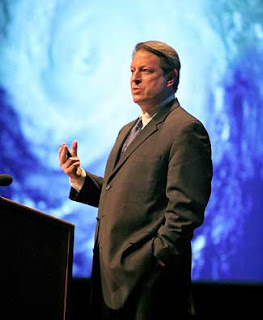 ... there is a planetary emergency in the making and our generation, and the few before it, are responsible for creating the conditions that have led us to where we are.

I do think the position is salvageable, but only if we face up to some pretty stark truths fairly quickly ... and take appropriate action.

So, I'm delighted that Al Gore has received (jointly) the Nobel Peace Prize.

... sure, his recent film had a few points that are still scientifically contested - but very, very few contest that current climate change is mainly caused by man-made emissions of greenhouse gases and that this will have serious consequences for the future.

I think today's award is just recognition for the vast, vast majority who 'do recognise' the inconvenient truth staring us all in the face. Senior national politicians, of which Gore is no longer one, need to recognise the same.
Posted by Andrew at Friday, October 12, 2007

Heartily agree. A good man and totally committed to his cause as he has always been - whatever the cause.

Unfortunately robbed of the presidency.

Still find it strage that he was jointly awarded the Nobel 'Peace' Prize. However my congrats to him and you for publicising it locally.

Even if the human effect on the climate is significant - and I'm not convinced of that - then the Uk has little impact compared to the huge emissions coming from China and India.

I think we should be aware of climate change and look at ways to cope with it and I think that we should minimise out pollution and soiling of the planet, but I am not convinced about the global warmig hysteria.

anonymous - I think you left out the US in your country list. They do a bit of damage themselves

Accept you're not convinced ... but I genuinely am.

I've just been in Glen Coe this week actually - looking as stunning as ever! - and obviously I accept that climate change has always impacted on that environment, but I do think it is impacting at an ever-increasing (and worryingly exponential) rate due to human activity.

I do though agree that we shouldn't get hysterical about it.

BTW, apologies for posting as Anon, but I work in the Council and don't really want to mix business and "pleasure" too explicitly!

Understand completely - as long as comments relate to posts, that's fine by me :-)