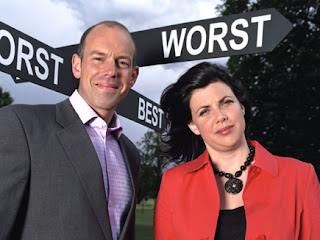 I've just spotted that on Thursday last week - whilst I was woefully failing in my quest to catch a fish from the River Orchy - Edinburgh was awarded "the best place to live in the UK" award by the Channel 4 programme "Location, Location, Location".

I was astounded, but pleased, to see the Council Leader gushing positively about the wonderful merits of the city of Edinburgh in the official Council News Release - full text here:

“This result is great news for the city and confirms what we all know – Edinburgh is a great place to live, work, invest and visit. The city truly has the best of everything; stunning architecture, fantastic employment opportunities, a vibrant leisure and retail offering, abundant green space, outstanding schools and universities…the list goes on.

“This is the latest in a series of positive and independent accolades, continuing the well-deserved recognition for the businesses and communities that make Edinburgh an outstanding city. The results echo loud and clear the conclusions of a recent MORI Poll of Edinburgh citizens which showed record levels of satisfaction with the city. We are rightly proud of our excellent quality of life and I am delighted that Edinburgh has topped the poll.”

The official Council News Release then goes on to list some of Edinburgh's positive attributes:

Not one mention of that previous crowd who, some claim, ran the city so appallingly for the last 23 years and had supposedly left Edinburgh on the verge of meltdown??

What with the research for the above Award having been done in May and June 2007, I'd have thought the Liberals could have claimed they'd turned the city around in lightning-quick time and rescued it from a further 23 years of hell-and-servitude ...

... on reflection, not even they have the brass-neck for that one.

Well I suppose my "Didn't they do well - only in power for a few months and get a great award from a reality TV show" comment won't go down too well.

It was interesting today seeing Bottler Broon in the House today taking the credit for what his new bumChum, Baroness Thatcher, did.

My, how we laughed all the way along Millbank to the bar.