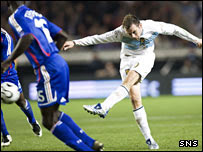 Not having access to anything other than the 5 terrestrial TV channels (we don't even have digital yet!), was forced to watch the England V Russia game last night - and, it has to be said, I think England looked pretty damned impressive.

Mind you, what about Scotland V France - not only are we obviously going to win the Rugby Union World Cup in 2007, the Football European Cup in 2008 is also now looking like a certainty ... that elusive referendum on Independence should be scheduled for next Summer and the nationalists would be certain of victory :-)

... of course, that's assuming Scotland thrash New Zealand at Rugby, as they did Portugal ... and humiliate Italy at Football, as they did France ...