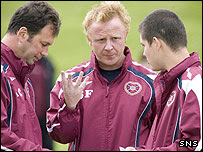 As recounted a couple of days ago, a quarter of the Council has called an Emergency Council Meeting to ensure the city is given a prompt explanation over the recent schools closure fiasco. I won't repeat here why I think it crucial this happens quickly.

... well, a dark rumour is circulating the City Chambers (I've heard it from several sources, so that IS as good as 'true' in local politics!) that the Lord Provost has called the meeting for 12noon on Saturday 15th September?

Now, remember they've had the requisition for this Emergency Council Meeting since Monday and could have called it at almost any time between now and the 17th September - only three days notice required.

So why call it in the middle of a local holiday weekend, that coincides almost exactly with the 12.30pm kick-off of the Hearts V Rangers game??

Now, just to be clear, I am no football fan - unlike many of my colleagues! - but this all seems designed to make the Emergency Council Meeting as 'difficulty-timed' as possible.

'Maybe' I'm becoming too cynical in my old age - but it strikes me as petty and not very professional ... then again, maybe I'm being naive to hope that it wouldn't be so :-(
Posted by Andrew at Wednesday, September 05, 2007

Surely with the Lord Provost being a minister of the Church of Scotland. It does amaze me to find that he has scheduled a 'business' meeting on a SUNDAY ! Most church goers should be in church at that time of day too.

Triple time for the Council Officials who attend the meeting for whatever reason ie security staff, secretaries , others.

THIS ALONE IS A COUNCIL GONE MAD AND IS AN UTTER WASTE OF PUBLIC FUNDS.

15th is a Saturday! ... even so, if the rumour is true, your point about levels of overtime may still be valid.

But on the other side, having an ever so slight chance of that vision in white, Bunty and the council's own in-house squatter, Teeth not turning up is probably just too good an opportunity to pass up.

Perhaps you could ask for spending at the Waterfront to be added to the agenda if they do find that all the "blue light taxis" are taken for the trip to Tynecastle and pub crawl afterwards.