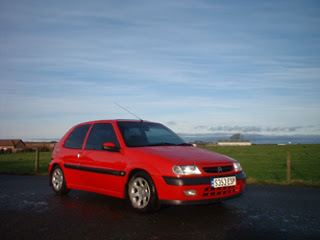 Joking aside about the quality of the car, bit of a serious "car key crisis" earlier this morning ... having lost the spare key several years ago (and having never bothered to replace it - a big mistake I now realise!), the only remaining key 'snapped' right in two whilst I was attempting to shut and lock the boot.

Not a good situation to be in - no spare key, only remaining key broken in two, half of that stuck in the boot lock, no way to lock the car boot or to actually even drive the car ... not good at all.

Thankfully, discovered a whole new trade that I didn't even know existed - "Auto Locksmiths" ... and one of them in Edinburgh had the situation sorted within a few hours ... broken key extracted, two new keys subsequently cut (and electronically chipped?) and all is well.

Of course, I wasn't about to use the car to commute to work but merely extracting bloody election leaflets from the boot ;-((
Posted by Andrew at Friday, February 16, 2007