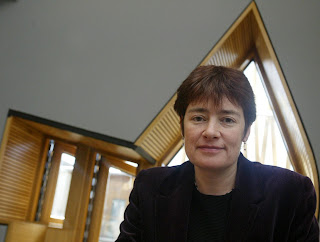 I was really pleased to hear that Sarah Boyack MSP was promoted yesterday, back into the Scottish Executive after 4-years on the backbenches, to the post of Deputy Minister for Environment and Rural Development. Now I'm biased, as I was Sarah's election agent in 1999 and 2003, but I can think of no one better qualified at Holyrood to hold this post and I wish her all the best over the coming months.

I'll always remember going to see Sarah sworn in on 12th May 1999 - just after the first elections to the Scottish Parliament - along with all the other first-time MSP's. It was one of those events were it's just impossible to convey the emotion of the moment on paper; but as someone who had campaigned long and hard for the establishment of a Scottish Parliament it was just tremendous (and a real privilege) to see Sarah amongst the first round of Scotland's MSP's.

You're right of course, given the vitriol in the press ... I would probably have been wise to congratulate Rhona as well.

No malice was intended - honest!