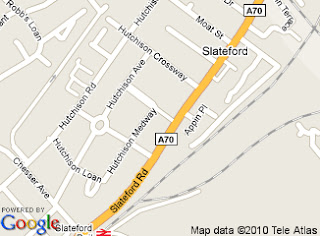 Significant planning application, for the Local Ward, up for decision later this morning ...

... relates to the 'old' ASDA site on Hutchison Road, which has been vacant (and derelict) for nearly a decade now; since the Superstore relocated across the road to Chesser Avenue.

I'm not usually one who is a natural supporter of supermarket developments, but later today I will be speaking in favour of the proposal for this site - a mixed use of residential development and a medium-sized supermarket (pre-let to Morrisons).

Frankly, several previous applications (and plans) for 100% residential development on the site have got nowhere and given the current economic climate I fail to see how 100% residential is going to be viable for some considerable time to come :-(

So, on balance, and to see a site no more than 2-miles from Princes Street developed, I think what's on offer is acceptable ... the Officers disagree and have the application up for refusal. Not a popular recommendation with the local community, who have generated a near-500 signature petition in favour of the current application!

I'll post again later, once the result of the Planning Committee meeting becomes clear.
Posted by Andrew at Wednesday, November 23, 2011

Andrew, I am not sure that sends out anything like the right signal: to get much needed affordable housing (if, indeed, the 40% target is ever actually delivered - let's watch that carefully) we have to thole yet another supermarket - on top of a mega ASDA at Chessr, Sainsbury in Gorgie and yet another Sainsbury just over in Longstone. I fail to see why the site is not viable as residential accommodation alone.

I take your point entirely --- I'm not someone widely regarded as a cheerleader for supermarket developments, and 100% residential would have been my 1st preference: but such an application has been tried (amongst many others) and they've all come to absolutely nothing over the last +8 years.

Local folk on the Hutchison Estate are heartily sick of 'absolutely nothing' happening to this site and they we're very supportive of the current mixed-use proposals.

So, a difficult choice I know, but on balance I dd conclude the current mixed-use proposals were supportable.

I find it staggering that you think it is appropriate to support the development of yet another supermarket at Hutchison Road. The only reason a residential development isn't viable is that the price put on the land by the owner is to high. It's about time local politicians and central government took real action to take control of the land market as this the root of the problem in the housing market. Are we really saying that the only viable development on the land in Edinburgh is supermarkets or hundreds of flats that are suitable to the needs of only a few.

I can only repeat my earlier response on this - I really am not someone widely regarded as a cheerleader for supermarket developments, and 100% residential would have been my 1st preference.

Many thanks for checking out the blog.