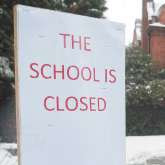 As predicted, a third Nursery School has been announced for closure today --- the proposed decision was communicated to Elected Members by e-mail at 2.29pm this afternoon.

The smokescreen for the closure is 'health and safety' and for completeness I'll re-produce the text of the e-mail attachment we received below --- and for decant you should read CLOSURE! --- but frankly, I simply don't accept the reasons being given for closure.

It's being closed because the Lib-Dem/SNP Budget in February 2010 took £302,000 out of Nursery Education - NOT BECAUSE of 'health and safety'.

In my last post on this, I forlornly asked for some honesty about this third Nursery closure - all three of which had been pre-configured in the February 2010 Lib-Dem/SNP budget - and today all we get is an e-mail which grasps at any straw available to justify a closure that was frankly decided upon over 7-months ago.

It's disgraceful, cowardly and an insult of epic proportions to the parents and children affected.

This briefing aims to update Elected Members on a report that will go the Education Children and Families Committee on Tuesday 12 October which will outline safety concerns at Westfield Court Nursery School and recommends that children are moved to alternative accommodation.

Westfield Court Nursery School is a purpose built nursery school on the top floor of Westfield Court. It is on the seventh floor of a multi-storey block of flats managed by Services for Communities in the Gorgie area of the city. The nursery currently has 25 pupils, four children with additional support needs, four full time children and 17 part time children (attending morning or afternoon).

In the last two years the nursery has been visited on a number of occasions by staff from the Council’s Health and Safety Team. On two occasions they have been accompanied by staff from Lothian and Borders Fire and Rescue Service. During these visits issues relating to fire safety have been addressed including those relating to the arrangements for an emergency evacuation of the children.

During the last Lothian and Borders Fire and Rescue Service visit, a number of fire related improvements were agreed. These included the introduction of smoke detectors in the common stairwells, a regular inspection regime of the building and a written Fire Risk Assessment and Emergency Evacuation Plan for the Nursery. These improvements have been in place for some time now and have allowed the nursery to remain operational.

The latest inspection was carried out by the Council’s Health and Safety Team in September 2010. The Council’s Health and Safety Officer has continued to raise concerns, particularly over the high level of supervision and daily inspection required to ensure that the evacuation routes remain clear and the very high child/staff ratio required during an evacuation. In addition, flammable material is occasionally stored in the stairwells by residents.

Having regard to best practice guidance for fire safety in a nursery outlined by Lothian and Borders Fire and Rescue Service, the Health and Safety Officer’s recommendation is ‘while the nursery can continue to operate in the short term, increased efforts should be made to identify suitable alternative accommodation for the children’.

In the light of these concerns, the Director of Children and Families asked officers to explore whether or not alternative accommodation could be found for the children currently attending the nursery.

This would allow the children to remain together as a group and they would move with their own nursery staff. The Acting Head Teacher would return to her own school, Calderglen Nursery.

The Director is taking a report to the EC&F Committee on Tuesday 12 October asking the committee to endorse her recommendations to move the nursery by the end of November and to call for a further report by officers on the longer term options for Westfield Court Nursery School.

All parents at the nursery will receive a letter today outlining the health and safety concerns and will be offered an opportunity to meet with senior officers from the Children and Families Department to reassure them about the situation and inform them about the relocation proposal.
Local councillors are being offered a face-to-face briefing on this issue.

This issue does not affect the safety of residents living in the flats as the Health and Safety officer recognises that the situation for an individual or family is very different to that which faces the nursery school, where staff would have to ensure a large number of small children could be evacuated at the one time from the top floor of the block.

My daughter attends this nursery on a pag place and I am disgusted by the way this is being handled.

I have requested a copy of the health and safety report and asked why the previous HT didn't share the issue of concerns about evacuation proceedures AND why a new fire system was put in place last year.

I feel I have been treated with nothing but contempt.

Thanks for commenting - and I'm really sorry this is all going to cause so much disruption for you and your daughter.

We won't be supporting this closure - and didn't have the £302,000 reduction in our Opposition Budget last February.

I understand that money is tight and savings have to be made, but all the more reason for prioritising what's really important ... and for me, in the revenue budget, that HAS to include Education.

Please don't hesitate to e-mail me if you feel I can pass on any other information at this stage ...