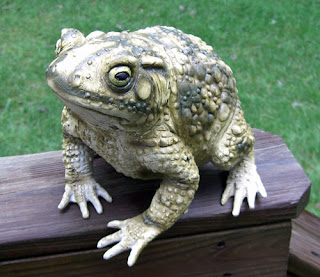 I knew I'd regret that prediction of a quick meeting :-(

... dragged on until 3.30pm, with several divisions that I didn't foresee. Anyone would think that the Lib-Dem/SNP Administration knew we were all due up at Liberton/
Gilmerton at 3pm?! Anyhow - we did get there for 4pm and Bill Cook still got a very good reception on the doors :-)

Being more charitable to my Lib-Dem colleagues' motives, I'm pleased to report that the Council Leader gave a verbal apology for the way the recent budget-briefing was released to the Press (and everyone else!) prior to the Opposition --- and I'm willing to take that apology at face-value and welcome the fact that she had the good grace to say sorry.

Laugh of the day though came when said Council Leader explained that the stone toad (I'm not kidding!) on the Committee Clerk's desk was a present given to the Capital (by Hull City Council) and that she would try not to look at the Councillor in the Chamber whom it most resembled ...