Returning to our past ... 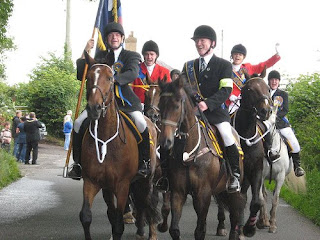 Proof today that Edinburgh truly is going back in time ...

... I've banged on about this general issue before, and just how the only things that used to encourage me to visit Edinburgh in the 1970's and 1980's were the zoo and the castle and how I seriously worry that the City is actually going back to those days :-(

Well now, to add to the new-zeitgeist of a 'Modern Edinburgh', we not only have:

The News Release isn't up on the Council web-site yet, but here's the text:

"SADDLE UP FOR THE RETURN OF THE RIDING OF THE MARCHES

After a 63 year absence, The Edinburgh Riding of the Marches is to be re-launched on Monday 9th February.

The launch will involve the presentation of a ceremonial City of Edinburgh Banner to the ‘Captain’ rider by the Lord Provost at the Mercat Cross. The Captain will then ride up the High Street towards the Lawnmarket flying the Banner, flanked by his supporting riders (3 horses in total).

The event itself takes place on 6th September when three hundred riders will make their way from Tower Farm stables in Braid Hills, into the city and up the Royal Mile to the Mercat Cross."

Edinburgh truly is returning to its past ...