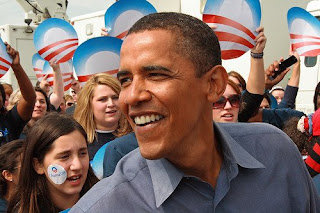 I just know I'll regret this - politicians making predictions; never works out! - but I've come to the conclusion that Clinton SIMPLY CAN'T WIN the 'pledged delegate' race for the Democratic nomination ...

... I'm no statistician, but looking over the remaining contests, it just seems impossible for her to do it - unless Obama does something completely outrageous (not likely, but not impossible of course) then I think he has the pledged delegate race secured.

Despite all the fuss over Ohio, Texas, Rhode Island and Vermont it seems no one has really noticed that on Tuesday Clinton won 187 delegates and Obama 183 - his total lead is still around 150 pledged delegates above his rival ... Clinton would have win big in EVERY ONE of the remaining states to close that gap.

It's just not going to happen.

Thus - it all comes down to the Super Delegates (the great and the good of the Democrat Party) ... are they really going to over-turn the will of the voters and install Clinton as their candidate even though Obama will have won the popular contest? Indeed, it seems to me, she'll need to get an absolute minimum of 65% of the Super delegates to do that (unless Obama's pledged delegate lead collapses - again, unlikely). Clinton currently has around 54% of the Super delegates to Obama's 46%.

So, I've concluded the game is over - Obama will win; and Clinton should stand down now and let the fight with McCain begin proper.

Let's hope you're right. Clinton has been behaving disgracefully and is wrecking the Democrat party. Let's hope the Super delegates do the right thing by the people and Mr Obama.

She is new Mick Huckabee.

Thanks for the comments - lets hope my prediction doesn't scupper his victory :-((

Not sure - the whole process is getting so down-and-dirty, its hard to know what to believe :-(

The Obama camp has been just as bad as Clinton's and their passive-aggressive politicising is also damaging to the Democrats.

OK, so there's a tidal wave of support for Barack but its purely an image thing. I don't think I've actually heard him come out with a single concrete policy or stance on anything - other than the need for "change".

The race for the nomination has been full of mud-slinging and snidey politics but its come from both sides. It seems to me that Clinton is being unfairly criticised for starting a dirty contest - after all, it takes two to tango.