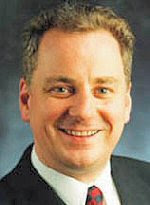 There's (obviously) been a fair bit written about Jack McConnell over the last few days ... I can't though find anything on the 'mainstream websites/media' that applauds him for, what I consider to be, his biggest achievement ... STV-PR for local government elections in Scotland?

I don't deny that trying to tackle sectarianism, efforts in Malawi, and the smoking ban are rightly recounted as notable parts of his legacy ... but he led the Coalition Government that introduced electoral reform for Scottish Councils, in the teeth of fierce internal Labour Party opposition ... tell me, I know!

... it's a reform that will have a long-lasting affect on Local Authorities across the nation. There's just no argument, that it's already brought a new pluralism to Scottish local government and that the old, almost unassailable, hegemony's have gone. That will be to the incalculable, long-term good of local politics (and local communities) in Scotland.

And what of all those predictions of doom-and-gloom prior to the introduction of STV-PR - you would have thought the world was literally about to end ... actually, bit like just before congestion charging was introduced in London :-))

It's a real shame he didn't press further and ensure that STV-PR was used for the Scottish Parliament elections as well ... he just might still be in power if he had! ... but I guess that will be down to his successor?

Surely this hardly counts as part of Jack McConnell's legacy. He might have agreed to it, but was it not the Lib Dems who pushed for it?

Obviously I agree that the Lib-Dems pushed for it; but many (admittedly a minority!) Labour politicans and the majority of Labour voters wanted it and also pushed very hard for it, myself included.

As the First Minister who delivered it, I firmly put Jack McConnell in the camp of those who actually wanted the reform.