Enough of the Hamster! 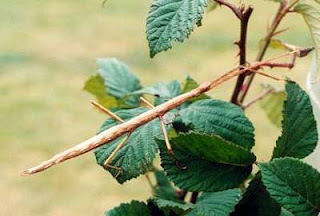 Enough of the Hamster ... what about a bit of fame for one of the many other members of our huge pet menagerie?

Well, as mentioned much earlier (follow that second link!), we do have a rather large collection of stick insects :-)

They reside in a big plastic tank in the kitchen ... problem is, they do occasionally manage to escape - bit like the damned Hamster actually :-((

Here's the flat-favourite (that's flat, as in house, and not squashed!) - called Gordon - during a brief spell of freedom in our back garden. I'm pleased to report that he is now safely returned to said-tank and enjoying all the luxuries of friendly captivity with numerous stick-insect colleagues :-))
Posted by Andrew at Thursday, August 02, 2007

As you know I am a well connected hamster. I found 2 recipes that you might be interested in.

20g fresh stick insects
1 large onion
1tsp ground cinnamon
Paprika to taste
Quickly roast the insects in a small cauldron, and set aside. Boil the rest of the ingredients, and simmer for 20 minutes. Add the insects and continue boiling for about 2 minutes, until they start to become soft. Transfer to a blender, and puree. Serve with toast.

Stick Insect a la Rouge
A beautiful looking dish that is perfect for special occasions.

1 plump stick insect, filleted
1 strand of saffron
6-8 grains of rice
Small dab of butter
1 parsley leaf
Place the saffron in the thorax of the stick insect, and fry in the butter until brown. Meanwhile, steam the rice and place in a warm serving dish about 3 cm in diameter. Place the cooked insect on the rice bed, and lay the parsley around its head. Serve immediately.


Can't really let some Stick Insects up stage me. Can I now ?

I find for the Phasmid soup that if you replace the ground cinnamon with a hot curry powder the taste is just that little bit more supreme.